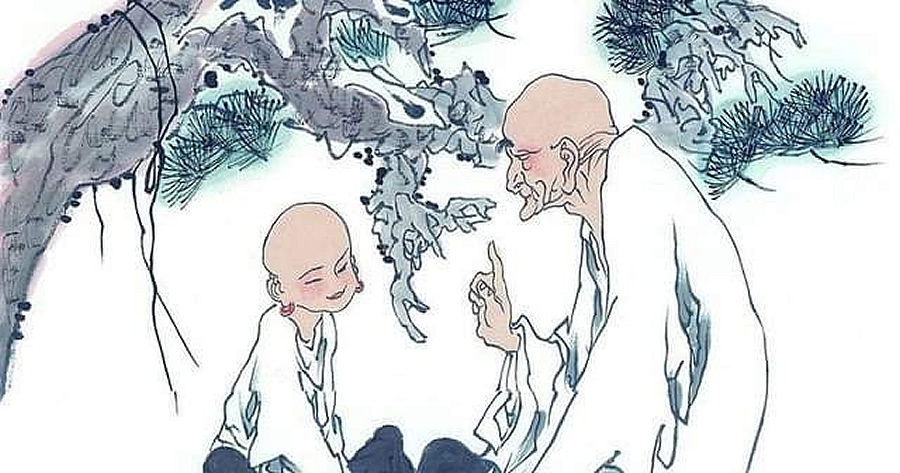 This problem is easily recognized by Zen Buddhism. It is for this reason that Zen does not ask the practitioner to earn their own enlightenment, for how can enlightenment come from the self when the self lies sleeping in the vale of illusion? Rather, the practitioner is asked to empty the self, to surrender conscious thought and purpose, and make room for enlightenment to enter from without. The study of koan, the Zen parables of paradox, is intended to help the sleeping mind let go of the dream, and prepare to receive the sudden blow that wakes and brings light to what was once dark.

We walk through our lives most often with eyes closed and mind asleep. The world is eager to lull us with its rules and its promises, its pleasures and treasures. Even the pains of life do not wake us up, only turn the dream from time to time into a nightmare. And though we all know that the dream will one day end for all of us, we avert our closed eyes and look inward, outward, away, anywhere but upon the truth of our mortality. We cling ever tighter to illusion and delusion, causing harm to ourselves and our fellows in the process, and lash out in fear and pride at anything that dares challenge our slumbers.

Jesus Christ, I believe, does a similar work in His sayings in His ministry on Earth. Not all of the sayings of His that are recorded are parables, but it seems to me that all of them call us, the listeners, to wake up from our slumbers and take hold of the truth. I wish to examine a few of Christ’s sayings in this way, and from them to derive a way to read all of His teaching as a call to wake and to follow Him into the light of truth.

When I was twenty years old, I lived asleep in the performative hypocrisy the American Protestant Church. Pride and fear allied in me to keep me cleaving to the arbitrary rules of early-2000’s Christian culture, while any voices calling to me that I was asleep I blocked out, unwilling to hear, and desperately afraid that my own performance might be unmasked for the fraud it was.

And then I read this old Zen story, known as“Gutei’s Finger.

Gutei raised his finger whenever he was asked a question about Zen. A boy attendant began to imitate him in this way. When anyone asked the boy what his master had preached about, the boy would raise his finger.

Gutei heard about the boy’s mischief. He seized him and cut off his finger. The boy cried and ran away. Gutei called and stopped him. When the boy turned his head to Gutei, Gutei raised up his own finger. In that instant the boy was enlightened.

As I sat there, insecure and proud, mind muddled and spirit confused, I read this “pagan” text and found my own truth written there as if waiting for me. When the boy raised his finger, I saw myself enacting “Christian” culture in unexamined imitation of my elders. When the finger was cut off, I winced, fearing my own exposure as a fraud before my community.

And when the fingerless boy was invited to participate in the practice of the finger, something rang in me like a distant, insistent whisper: wake up.

All in a flash, and without words, I realized that the true practice of my faith did not require performance, did not ask for imitation, or enactment, or anything in advance. That if I had nothing, no job, no education, no money, no reputation, no, not even my own body, I could still follow Jesus. And in fact until I lost everything, until my own finger was cut off, I could never really begin to follow Him; for He Himself laid down everything for my sake.

In the reading of this koan, I became enlightened. I began to wake up.

Jesus’ teachings have come down to us across millennia, and time has not dulled their sharpness nor decreased their urgency. One day, early in His ministry, Jesus saw the multitudes, and went up on a mountain; and when His disciples came to Him, He opened His mouth and began to teach them, saying,

“Blessed are the poor in spirit,

For theirs is the kingdom of heaven.

Blessed are those who mourn,

For they shall be comforted.

Blessed are the meek,

For they shall inherit the earth.

Blessed are those who hunger and thirst for righteousness,

For they shall be filled.

Blessed are the merciful,

For they shall obtain mercy.

Blessed are the pure in heart,

For they shall see God.

Blessed are the peacemakers,

For they shall be called sons of God.

Blessed are those who are persecuted for righteousness’ sake,

The beginning of waking is to know that we are asleep. The beginning of the search for meaning is to recognize that we do not know what our lives mean, and to ask. Into our sleepwalking lives Jesus comes, descending from ultimate reality into the doubt and confusion of our world, calling us to wake up and to follow Him out of night and into the brightness of day. If we listen, really listen, to Jesus’ words and take them seriously, we will ask ourselves, “How can this be so?” In that moment, our false certainty cracks open wide enough for His truth to enter in and begin its work. And we begin to wake.