Take away the Christian faith and one wonders what would be left artistically, architecturally – in almost any concrete area there would be an almost Pascal-sized abyss where once there were richess beyond measure.

But what have we done lately? And what are we doing in the face of the steamrollars of Postmodernism who deconstruct more often than construct?

This report is small. Like a biopsy it can only take a small sample here and there to determine some areas of health. I have chosen to turn specific attention to the current Asian influence on Christian art through the works of artists like Makoto Fujimura (in the U.S) and Nyoman Darsane (in Bali).

Well established in the Art world, Mako Fujimura’s art is recognizable almost immediately. It ranges from the deadly serious (post 9/11) to the whimsical (such as his series his current series in New York; Silence and Beauty.)

Fujimura , in the following video says that “art is transgressive” and that “we need to transgress in love.” He contrasts this with our Modern language that “celebrates waywardness.”

Fujimura has a certain fearlessness in both subjects and mediums. He will use gold (in leaf and powdered form) as a medium – which would be unnerving enough on his large canvases, but then he will take on Post 9/11 depictions or do illuminated art for the 400th Anniversary edition of the King James Bible. So while a Modern artist working in New York he is hailing back through time and allowing traditions to inform him – from illuminated biblical texts to his artistic bedrock in Nihonga artistic technique, Fujimura is also a scholar of art with several books and who has earned four honorary doctorates.

Illuinated art for the 400th Anniversary edition of the King James Version produced by Crossways Books.

See related a longer related article and analysis of Fujimura by the author HERE.

The best introduction to Darsene is given by Baltimore writer/blogger Victoria Emily Jones, who says,

“At age seventeen, he became a Christian and as a result was ostracized by his family and village community.  But because he so persistently strove, through his art, to give Christianity a Balinese shape, they eventually decided to accept him back in.  They saw that he still loved and respected the culture; he was still “one of them,” even though his religious beliefs took a different turn.  Does he feel that, as a Balinese Christian, his identity is divided, that he cannot fully embrace both at once?  Not at all.  “Bali is my body; Christ is my life,” he says.  In other words, Jesus Christ is his all, but can he not pray to and worship and express his love for Jesus Christ in a Balinese fashion?  And can he not picture Jesus as a fellow Balinese, incarnate in the skin tone and dress and dance poses of his people?” 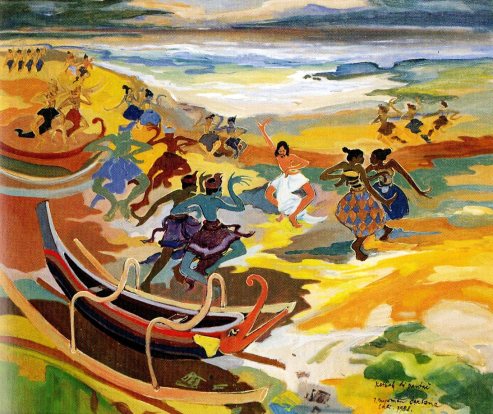 Dance is a major aspect of the Balinese culture as perhaps best known by the wayang purwa – or the dance of the shadow puppets. 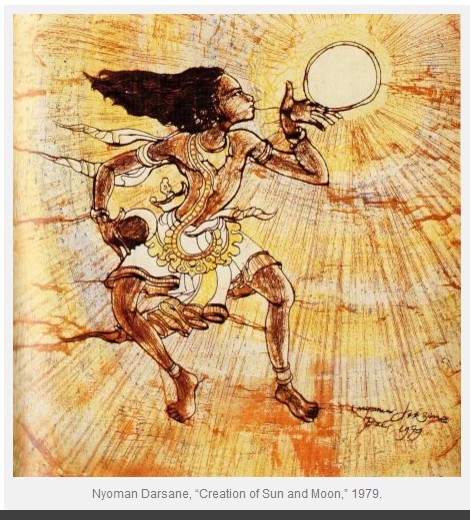 Nyoman Darsene creates a batique-like rendition of Jesus creating the Sun and Moon. This has all the framing of the Balinese shadow puppets.

Darsene recontextualizes the Gospels within Balinese culture rather than attempting to destroy it. In this way he is an example for those wishing to take the expression of longing and lostness which exist in any culture and inform them with new meaning. In a sense this is no different than what Paul attempts to do in Acts 17 at Mars Hill where he seizes both upon the Athenians art and their poets and then proceeds to tell them that the “unknown God” can actually be known.[4]

I agree with Fujimura that “art is transgressive” although the word I choose to use is “subversive” – meaning that it presents a “different text” or series of “verses” – an alternate view of reality to the dominant culture in power (and always will).

In that regard “Gospel” is always good news that the dominant culture, and its metanarrative, is a lie. The Empire has no clothing and it is up to artists of all kinds (musicians, poets, painters, videographers, iconographers, etc…) to keep revealing nature, beauty, truth (in all its forms) and sometimes even the trailing backside of God’s glory after they have been deposited in the cleft if some rock.

This, to a very real degree – always keep the Artist at odds with the Powerful.

Many artists create out of brokenness – in fact it was Otto Rank in his famous book Art and Artist who said “The difference between the artist and the neurotic is basically talent.” So Kintsugi – presents artists with both a world of beauty and a great metaphor for the human condition and its redemption. Here is a rather fun and humorous video done by a fellow who has really done some research:

Not confined to just scriptural images and narratives, global Christian art has the potential to tell new stories as well as unmask the old ones. Surely this is what we have seen in the best authors: Flannery O’ Conner, Walker Percy, Tolkien, and then the countless classics working against that backdrop (like my own personal favorite – Steinbeck’s East of Eden.)

Christendom may have shut down a great deal of the dialog with the Postmodern culture via it’s coercive tactics and tuned others off with its “Gospel as Product” nonsense – but the Arts are still a healthy and wide open venue for theological exploration – if you are any good.

You have to be good – both as an artist and as a theologian.